Let's Talk Torque! - How To Use A Torque Wrench – Bicycle Warehouse Skip to content It's important to know about torque as most bike parts require specific torque settings for many installations. So let's talk some torque.
First, the definition: torque is force applied in a rotating or twisting motion. Think of a bottle cap. The effort (force) it takes to break the cap loose is torque ("break-free torque"), and when you put the cap back on, at the moment you stop turning the cap, the force required in that moment is the torque value to which the cap has been secured ("security torque").
There are many torque units, because they can be the result of a combination of any number of force units combined with any number of lever-length units.
Think of tightening a nut or bolt with a wrench that is one foot (twelve inches) long. If applying a force of 10 pounds to the end of the foot-long wrench, the security torque achieved would be 10 foot pounds (10 pounds x 1 foot). Because "foot pounds" takes a lot of space to write, and because it is conventional to express measurement units as abbreviations or as symbols, "10 foot pounds" usually appears as "10 ft-lb." Interestingly, it's not "10 ft-lbs" because "lb" is an abbreviation for the Latin word "libra" (the singular Latin word for "pound of weight"), the plural of which is "librae" (so both abbreviate identically to "lb"). Fortunately, when we verbalize these torque values, we don't have to say "1 foot-libra, or 10 foot-librae). Enough of the grammar lesson. In the above example, with the wrench length and the force remaining the same, if you express the wrench length in inches, then the torque value becomes "120 in-lb" (1 ft. x 12 in. x 10 lb. = 120 in-lb).
Inch pounds are by far the most common primary units utilized on mechanical torque wrenches used in the USA (in the torque ranges typically found on bicycle parts). However, bicycle-component manufacturers often provide torque specifications in Newton Meters (abbreviated "Nm," or sometimes "N*m").
Many mechanical torque wrenches have two scales (in-lb and Nm), but the Nm scale is secondary, which results in all the Nm values being in decimal form instead of in whole units (for example, 120 in-lb appears as 13.56 Nm on the metric scale of a tool that's primary scale is non-metric).
A new category of torque wrench is becoming common, known as "torque limiting" torque wrenches. These may be adjustable, or set to a fixed value, but they give way once the value has been reached, making overshooting the intended torque impossible. This category is usually marked in Nm units, and this style of tools are made available in the range of torques typically found on stem bolts. It has also become conventional for manufacturers to silk screen Nm torque values onto components. Digital torque wrenches exist for many (but not all) applications, and these can be effortlessly toggled between the common torque units.
Consequently, today's mechanic must be familiar with both inch-pound and Newton-meter units, and be able to convert between them. The math is simple: in-lb x .113 = Nm, and Nm x 8.85 = in-lb; alternately in-lb / 8.85 = Nm and Nm / .113 = in-lb. Following are links for two online converters (the same website has the capacity to convert between almost any two known torque units):
Nm to in-lb (http://www.unitconversion.org/energy/newton-meters-to-inch-pounds-conversion.html)
In-lb to Nm (http://www.unitconversion.org/energy/inch-pounds-to-newton-meters-conversion.html)
A few "rogue" torque units may be encountered that are primarily vestiges of the past. For example, in the metric realm, kgf-cm (kilograms of force applied to centimeters of lever length) sometimes appears. Also, while "foot-pounds" were used earlier in this article, it's rare that this unit appears any more as a bicycle-component torque spec. Foot-pounds are more commonly used on cars and other heavier machinery.

Thanks to John Barnett for some great torque talk. John started the Barnett's Bicycle Institute which is the premier training facility for all qualified bicycle mechanics.
At Bicycle Warehouse we look forward to keeping you rolling at 100%. Click here for more info
Bicycle Warehouse

HOW TO USE A TORQUE WRENCH

JUST THE RIGHT AMOUNT OF TIGHT : WHY YOU WANT A TORQUE WRENCH AND HOW TO USE IT!

Have you ever had a creaky seat, or a shifter lever come loose during a ride? Join the club! If you haven’t tightened nuts and bolts on your bike properly or haven’t done a bolt check in a long time, those fasteners can come loose and cause some serious problems for you out on the road or trail (or at least cause some seriously annoying noises). So, how do know when you’ve tightened your bike’s bolts enough and prevent over-tightening? It’s all about TORQUE!

Torque is rotational force and can be measured in inch-pounds (in-lb), foot-pounds (ft-lb) or, most commonly, in Newton-meters (Nm). When you tighten a threaded fastener (like the nuts and bolts on your bike), it creates tension which holds the joint together. Each fastener on your bike is designed for a certain range of tension, known as a “torque specification”. Often, you can see the recommended torque spec clearly displayed on the side of bike parts, like on your stem or seatpost collar. For other fasteners on your bike, consult your owner’s manual or look up the torque spec online.

Why is Torque Important?

Because every fastener is designed to be loaded with a certain amount of tension, nuts and bolts that are too tight or too loose could cause some big problems during your ride.

Under-tightening nuts and bolts could cause them to come loose while you are riding. The risk caused by bolts coming loose ranges from rattling or clanking bike parts, premature wear to those bike parts, and/or bike parts moving or falling off. This could be a serious issue and could even result in a crash.

Over-tightening nuts and bolts could deform the threads or the bike parts they are holding in place, or even cause the bolts or parts to break due to tension. This is an issue particularly with carbon bike frames and parts that can be crushed by too much pressure.

How to Measure Torque

A torque wrench is a tool for measuring a fastener’s resistance to rotation. The only way to be absolutely sure you have tightened the nuts and bolts on your bike adequately is to use a torque wrench. There are two main types:

Beam-Type Torque Wrench: A beam type torque wrench has a simple design and can be used to tighten a wide variety of fasteners. To operate, add the correct bit to the socket of the wrench. With your hand on the handle, tighten until the reading at the end of the pointer matches the torque spec. Always make sure the pointer is at zero at rest. If it’s off, you can use a tool such as a screwdriver between the two beams to bend the pointer back into place.

Click-Type Torque Wrench: A ratcheting click-type torque wrench allows you to select the torque setting from a designated range. Make sure the torque wrench you have will accommodate the torque spec on the fastener you wish to tighten. To operate, add the correct bit to the socket of the wrench. Select the desired torque setting and tighten the fastener until you hear and feel a “click”. Preset torque drivers are operated the same way. 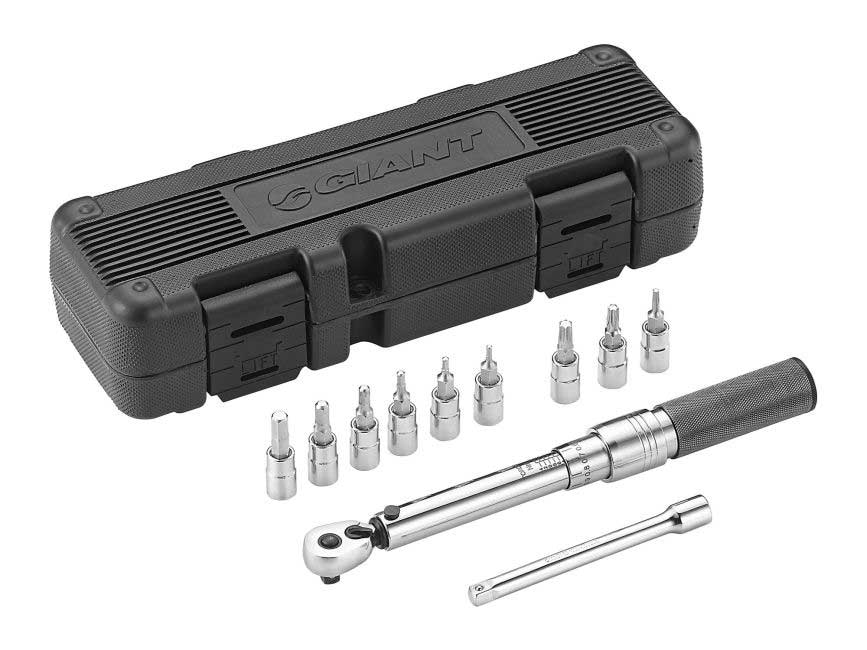 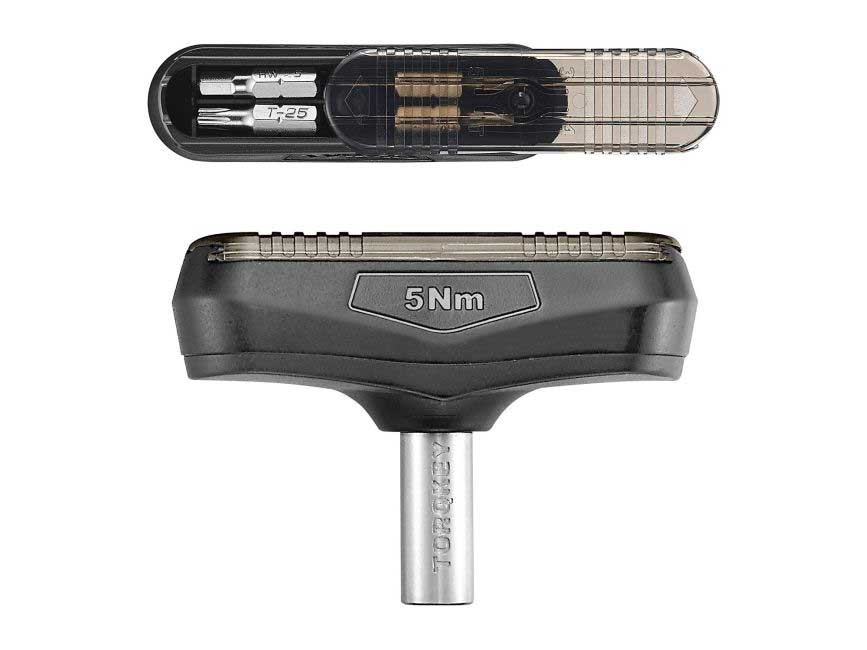 Tips for Using a Torque Wrench

We'd like to thank our friends at Liv Cycling for providing information and images used in this article. Thanks for reading our article "Let's Talk Torque!" If you have any questions or want gear recommendations drop us a line and we'll get you rolling!

Check out some of our favorite BLOG's below!

Bicycle Warehouse has a number of financing options to help you get your dream bike and all the gear you need to have more fitness, freedom and fun.

If you're local to Southern California we invite you to visit one of our Bicycle Warehouse retail stores to experience the best selection and service around.

We have a fleet of awesome mountain, road, and hybrid bikes standing by, come down and test ride the bike of your dreams today!

Find a Bicycle Warehouse Store Near You!